General nukkad-style discussions.
This forum is lightly moderated, and members are expected to moderate themselves.
Post Reply
747 posts

Gus wrote: ↑
Sun Sep 09, 2018 1:56 am
Disappointing. Sam Curran made the difference twice and our inability to blow the tail has hurt so much.

Usually it's the seventh and eight wickets that hurt us. This time it was the 9th and 10 wickets.

Virat Kohli and Joe Root were spotted wearing a unique poppy made out of khadi cloth during the fifth Test match at Oval. In a heart-warming gesture, the skippers of both teams united to recognize the efforts of the Indian soldiers during the First World War.

Hopefully, we'll salvage a draw for the last test at least. 3-1 to end the series..
Top

Here are the stats from the test tour.

We really had to lose 1 wicket?

Any links for watching highlights ?

So we play Beggardesh in the finals now.
Top

Another match, and another lop-sided loss later, we have more than one way to skin this cat. We can do the obvious, which is to point out the plethora of blunders to bash the team, its captain and demand wholesale changes. Or we can take the less popular, riskier and twice failed route of sticking with the Greenshirts, and build the narrative that the twin defeats so far would mean nothing if they win the final.

Depending on the route taken, we'd be assuming that either this team are flat-track bullies with stuffed up numbers due to having played the Zimbabwes, the Scotlands and the West Indies of the world this past year. Or we'd be assuming that the team are okay, and it's only a matter of time before they click and become the world beaters we think they are.

Truth is that the truth lies somewhere in between. After what has transpired in the past week, even the ardent of fanboys cannot say with a straight face that Team Pakistan, on the hole, are at par with the big fishes. It would also be incorrect to say that players such as Fakhar Zaman, Babar Azam, Hasan Ali and Shadab Khan do not have world class potential.

So why is a team of talented individuals faring this horribly as a unit, and against a specific unit?

Pakistan, since their Champions Trophy triumph in the summer of 2017, have played and dominated a half-serious World XI side at home; a woeful Sri Lanka; a super woeful Windies at home; a Scotland side and then a Zimbabwe side in limited-overs series.

Their July victory in a tri-series that also featured Australia can be counted as the only real achievement of the past 12 months. The only time they were given a real assignment, they came back home from New Zealand, tails between their legs, and with a 5-0 drubbing.

The saying goes: to be the best, you have to beat the best. But how do you beat the best when THEY don't even play YOU?

This team has not had real competition or pressure that comes with playing in front of packed houses — intangibles that there are no substitutes for. This is why when things get difficult under the brunt of expectations, they freeze or make mistakes that can't be explained.

Under Najam Sethi, the PCB and the powers that be took some baby steps in removing the handicap that keeps our players from turning their potential into something world class. But baby steps were all they were.

With a cricket legend now heading the country, the board and the powers that be need to immediately rethink their strategy and address whatever there is that keeps top cricketing nations from visiting the country. If they sleep on it, the growing chasm between Pakistan and the teams above may outpace the shrinking chasm between Pakistan and the teams below.

AsiaCup’18: Dear Pakistan, you can’t be a champion if you only play against the weakest

Now that Pakistan has been put out of its misery and the dust is finally starting to settle, let’s get back to the drawing board. There is a lot that went wrong but it wasn’t entirely unpredictable.

Give me an opportunity to walk you through the events that transpired when the nation was still high on the Champions Trophy victory. Immediately after becoming champions, Pakistan hosted a weak Sri Lankan team in the UAE. They cruised their way to an ODI clean sweep. Confidence went skyrocketing and a bubble of illusion was formed.

Then came January of 2018 and we went on a tour to New Zealand. This was our first competitive tour since June 2017. Pakistan got hammered, beaten, thrashed, smacked and finally whitewashed in the ODI series against New Zealand.

I tried to raise the red flags that all is not well. I wrote on Pakistan seeming like a lost child but little mattered back then because we were still watching the Champions Trophy final on repeat. It was alarming that whitewashes didn’t hurt our ego anymore; somehow Pakistan Cricket Board (PCB) scrapped that humiliation from the fans’ memories. They kept diverting focus to our T20 ranking.

Then came the below par West Indies tour of Pakistan in April of 2018, three months after the boys returned with bruises from New Zealand. There was not a single ODI scheduled. The team kept breathing life into the Champions Trophy memories.

Next up, the Men in Green went on a tour to Ireland, Scotland and England during May-June of 2018. They toured three countries and participated in a total of zero ODI series. Nobody cared!

By this time, one whole year had passed since the Champions Trophy final and except the drubbing received in New Zealand, Pakistan had not played ODIs against any top competitive side. Nobody cared!

July of 2018, Pakistan decided to tour Zimbabwe that included five ODIs. I am all for promoting cricket but is the responsibility of playing against teams of lower quality solely on Pakistan? Had we not done our share by playing Scotland and Ireland earlier in the year? We beat a depleted Zimbabwe side 5-0 in ODI series with a full strength team and blew more air into our bubble of illusion.

Finally, we enter September of 2018 and where we stand today. We entered Asia Cup high on a victory that took place more than a year ago. Since then we have not played a single competitive ODI series, except one where we took a severe beating from New Zealand. Instead of being nervous of our lack of preparation prior to the Asia Cup, PCB made a great use of white lies.

Misleading numbers, stats and figures were used to hype up the fan base. Figures such as Pakistan has won its last ‘xyz ODIs’ or Pakistan has not lost in the UAE for ‘x amount of time’ were floated around on social media.

White lie means telling a partial story and intentionally hiding the relevant facts. Nobody revealed that the stats are highly inflated because Pakistan has only been playing ODIs against below average teams.

The stats of teams like India may not seem so pretty on paper but that is because they have been playing only quality cricket. While Pakistan was busy sending their top quality side to tours like Zimbabwe, Ireland and Scotland, India was battling with the big boys. Whether India lost against Australia or England would not matter. The fact is they were always playing best quality of cricket.

Now that we have done a little flashback of what has followed since our Champions Trophy victory, tell me honestly what surprises you? Isn’t a team that plays quality cricket supposed to thrash a team that either played no ODIs or played against lowest quality opponents for a whole year?

Does it surprise you that a team that has won no significant ODI series against a quality side in over a year got knocked out of the Asia Cup? If this was not on the cards then what was the expectation? Did we really think we would wake up to see Fakhar Zaman ride his luck and guide us to another trophy?

I didn’t say a word prior to the Asia Cup. I knew the bubble hasn’t burst yet and my concerns regarding the team wouldn’t hold merit for Pakistani fans. Finally, when the nightmare has ended for Pakistan, I thought it would be best to share where I felt we went wrong.

Sarfraz Ahmed will face an unprecedented amount of criticism, as the losses have undoubtedly been embarrassing and ugly. His captaincy, specifically in the last match against Bangladesh, has been appalling. However, it is not entirely his fault as the management had scheduled tours with teams that never tested his captaincy for an entire year, barring Pakistan’s tour of New Zealand.

Fans will be calling for heads to be rolled but that is not the main problem. These young players were talented back in Champions Trophy and they are talented today as well, but how will you discover your weaknesses when you only play against the weakest?

To remain a champion, one must keep playing against champions. Pakistan did the opposite and paid the price. Batting, bowling, fielding and captaincy, all of it went downhill when the pressure was on and the opposition wasn’t amateur. Tour better teams next time prior to a tournament or choose a different tournament where only Ireland, Scotland, Sri Lanka, West Indies and Zimbabwe are participating. We’re not ready for the big boys as yet!

aha.a chance to have some fun at the bd forums..

..and they are crapping on walsh for some reasaon

and this "BCCI robbed everyone in my opinion in terms of the way they scheduled this tournament. So unfair. Even after all that travelling BD put up a nail biting final. Shame on BCCI."
Top

our urban naxals to the rescue,

Into the breach, once more 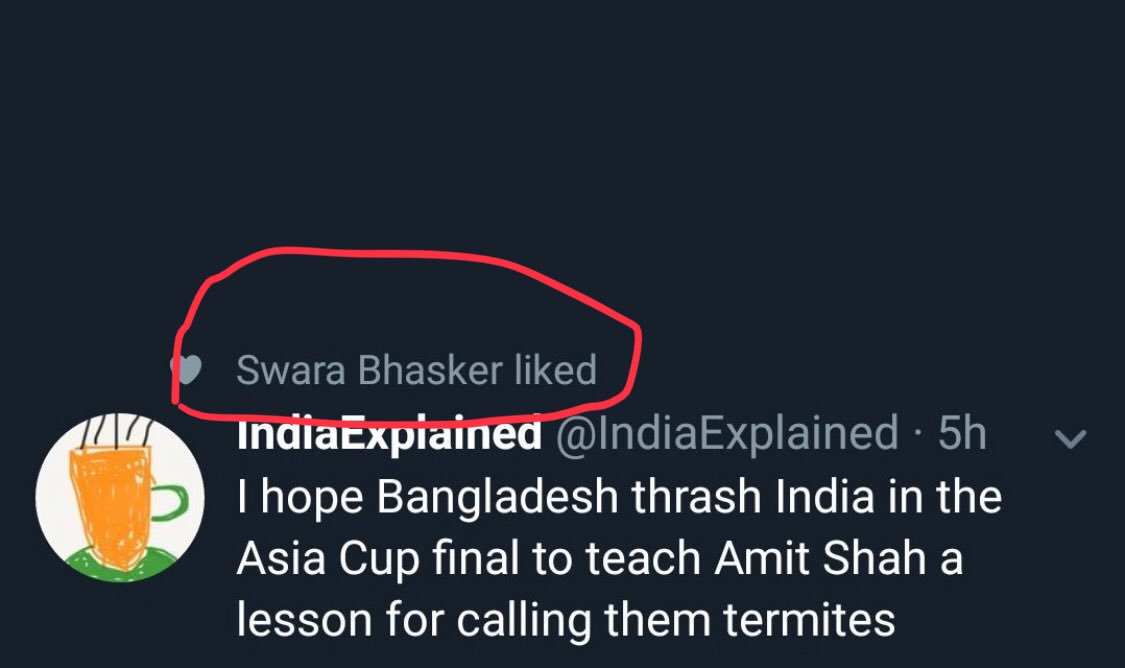 Why do we play against WI anymore ?
They are hardly the team of the yore and can hardly bring in spectators. I would not watch a WI team playing even on TV for free.
Better give time off to senior players to indulge in adv and RR before the big bad tour down under.
Top

reciprocal obligations. traveling to WI and winning over there is still a bit of a challenge and worth it I guess...so we have to suffer reciprocity..
Top

My God.
We were close to getting 5 centuries in 1 inning.
Could have been a record.

Pakistan had 5 centurions in a score of 546, interesting
Top

Test with WI is the new ODI with Sri Lanka.

We should have yearly eng, aus and sa series - either home or away. All others should be once in 2+ year affair.
Top

We should have yearly eng, aus and sa series - either home or away. All others should be once in 2+ year affair.

Series with Windies these days is to improve averages and feel good. Why could we not prepare hard deck tracks to prepare for tour downunder ?
Top

If we have hard wickets, the match will last one and half days from the three days now.
Top

Australia has become a bakwaas team. Now-a-dins they are even losing to Pakistan.

India yet again proves why its the best side in the world when it comes to pure batsmanship. Give them a flat wicket and even 400 would look easy target. In the end it seemed like Rohit Sharma was playing an exhibition match. This series looks like a 5-0
Top

After decades of behaving like pakis, Cricket Australia is in full melt down mode. Like the real pakis.